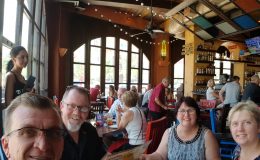 Well the day finally arrived and we headed to the Brisbane International airport, we had organised pre-paid parking.  The signs to go to the valet area are a little vague though.

Once in the airport the pre-checkin is a slow process, we got issued the wrong tickets and had to get them changed. They had us back to far in the plane, we’d paid for economy X which gave us more leg room. No lounge acess despite me paying for the Virgin lounge, it only works domestically. So I won’t be renewing it next year.

The flight over was ok, long time tomorrow sit in a plane, I can only imagine what flying to Europe must be like.

Getting into the USA is a long process, the automated system isn’t very quick then you still go through border security. Once done we dropped off our bags tor the next leg of the trip.

Las Vegas airport is huge, we got off the plane and had to get a tram to another part of the airport to collect our bags. From there it was a shuttle bus to the car hire pick up point. Getting the car was hassle free, driving it into traffic was a little nerve wracking at first.

We booked into New York New York without any dramas, had a quick bite to eat and headed out to the strip for a look around. Picked up a USA phone SIM card to make things easier for what we had planned.

Once our friends arrived we caught up for some liquid refreshments. We later ventured down the strip for a look around and had dinner at Bubba Gumps. We finally went back to the motel after being up for maybe 29 hours.

Breakfast with the birthday girl.

Day 7 we hit the road again to travel to Blackdown

Day 6 we travelled from Lake Dunn to Salvator Rosa

Day 5 done , missed updating our travels due to a

Day 4 completed of our October thirsty tour. #the

Day 3 completed of our October thirsty tour. #the

Day 2 completed of our October thirsty tour. #the

Day 1 completed of our October thirsty tour. #the

Testing out the new firepit. #fridayafternoonchil